Winter is being stubborn this year, with the coming week forecast to be below average, but quality hay production keeps taking up more and more of my thoughts lately.

We are starting the process of reaching out to current and prospective clients and seeing where their hay needs are for the coming summer and winter. We are also having lengthy chats about how to most fairly allocate hay between current customers and people that are almost desperate to find hay because they are either in a drought already and/or drought is forecast for their area of the country.

We would like to allocate hay in the following order:

1. Ask existing customers about their needs and get verbal/signed/email commitments in the early spring. Records of the "date of commitment" are kept.

2. Ask prospective customers about their needs and get verbal/signed/email commitments by early summer. Records of the "date of commitment" are kept.

We hope that this method seems fair to everyone. Our goal is to give existing customers a 2-3 month advantage in "committing" to hay supplies over new customers. When hay has been produced it will be scheduled for shipment in the same order as people committed to the hay.

We are also eliminating the choice between second or third crop Orchardgrass. Over the years we have taken a substantial number of forage samples from different cuttings and sent them into a lab for analysis. These results are posted on our website (www.groeschlag.com) and have demonstrated a number of things worth passing along to our customers. First and foremost, Orchardgrass only goes to seed once in the spring of the year, with all the stems taken with first cut. Second, the quality of ANY cut is mostly determined by the age of the growth and the conditions it was grown in. Any short day second cut (30 day growth) can be better quality than a 30 day third cut that was stressed for some reason, whether that reason is weather, fertilizer, or pest related. We have spreadsheets that we use to help track the variables per field/per cut, monitoring what we applied for fertilizer, when it was applied, when it rained, how much it rained, overall growth conditions, and harvest conditions. Third, most of the differences between our third and second cuttings are relatively small when compared to different forage options as a whole. A good protein for us may be 14-16% and a bad protein may be around 10% while other hay, especially alfalfa mixes, could be mostly stems and still test at 10% protein or be premium quality and test well above 20% protein Our Orchardgrass is 100% palatable, no matter if its second or third crop.

Another reason for the elimination of choice between the second or third cuttings is because it will hopefully make the allocation part of the season more straightforward. For example:

8 different clients insist on only third crop and they want 10,000 bales

We harvest 8,000 bales of second crop. The first group of clients is now 2,000 bales short, and in my opinion, should be first in line for third crop. But if the third crop people committed first chronologically, things can get pretty gray pretty quick, especially if we fall short of 20,000 bales of total production. As long as people are OK getting good, green, well-made Orchardgrass hay in the 10-15% protein range, we feel that a simple list of who wants first cut and who wants 2nd/3rd cut is the best way to proceed. If another variable arises this year and we need to tweak the system, we will absolutely do so because this is our livelihood and we want to be YOUR HAY PEOPLE.

I guess what I'm trying to say is that there needs to be a certain amount of trust between the hay producer and the animal owner. We do not raise hay "on the side" and farm row crops as our main income. Hay, and eventually forages in general, are our main income. You take care of your animals to the best of your ability and we raise, harvest, and transport hay to the best of our abilities. We will not try to portray any product that we're selling as something it isn't. We try to keep our pricing structure simple, honest, and uniform because we want to be YOUR HAY PEOPLE.

Thanks for reading the ramblings of a hay farmer in the winter.

Adding to the Fleet! 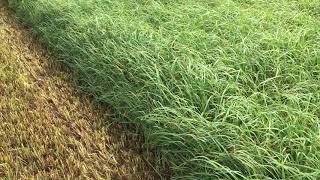 Getting excited for Spring!

Pictures of new shed! And the new Hayliner baler!

Getting ready for Spring fertilizer